LIGHTING
I was probably the first to suggest that strong illumination was correlated with "shell disease" in O. scyllarus. That was 10 years ago.

When a large male would start to show discoloration, I would turn off the lights, up feeding and add supplements, add uv sterilization and provide a longer, darker burrow made of black pvc. I also upped water changes, particularly when nitrate levels were high. More often than not the animal improved after a couple of molts.

I also noted that the 'disease" appeared to be contagious, infecting other animals in the tank. Of course this was only a correlation. The same factors causing the disease in the first animal could be causing it in subsequent animals if those factors weren't eliminated. I also reported that large males captured in the wild often had signs of shell disease and that animals that were slow to move through the export process also were more likely to show signs of cuticle problems, particularly if damaged in fights. Much of what I was suggesting was common sense. Stress weakens the immune system and an animal without a good burrow and in bright light is stressed. Also, speed up molting and the cuticle disease has less time to erode and penetrate the exoskeleton.

Ten years later we know no more about the causes, prevention and cure of shell disease than we did then. I don't know of a single study that has isolated and characterized the infection or that has systematically treated it with antibiotics or anti-fungal medications.

I keep dozens of O. scyllarus each year and loses due to shell disease are now rare so I will keep doing what I have recommended. However, when asked for specifics, without scientific studies I can't provide much except to hark back to good food, good water quality and less stress which should be the goal to keeping any stomatopod.

Last time I went diving with O. scyllarus, they were living in areas with rich hard and soft coral cover at depths between 5 and 30 m. I rarely find O. scyllarus shallower than 5 m and they seem to peak in numbers at 10-20 m. If you choose light intensity and spectrally appropriate to those depths, the animals should be fine as long as they have dark burrows to spend most of their time. And yes, there are lots of studies on ambient light characteristics on coral reefs at depths down to 30 m. I've spent many boring dives with Tom Cronin and Justin Marshall taking that data.

I kept my first O. scyllarus 39 years ago and I would estimate that I have had in the lab over 500 since then. Until I figured out that light was a critical factor in the shell rot syndrome, most of the larger individuals developed shell rot. Now we use no aquarium lighting, just normal fluorescent (cool) lighting. Over the last several years, it is rare that I lose any except the largest males to shell rot.

Blue is more natural for the stomatopod, but the light spectrum is also going to influence the microorganisms that infect the cuticle and there I don't have a clue. Given that I've had success with cool light, that is what I would use.

Without knowing the specifics of the tank and substrate available, I'm going to make a general comment - it is generally better to go with pvc. The reason is that most tanks are not large enough and do not have the correct mix of substrates to allow the O. scyllarus to build a suitable burrow that is sufficiently dark and that provides the needed mechanical contact of a tight-fitting, long burrow. Most people through in some live rock on top of a couple of inches of clean coral sand and expect the stomatopod to build a suitable burrow. It will do its best, but usually all it ends up with is a cave under a rock. The burrows that the O. scyllarus dig in the field are just slightly larger in diameter than the animal and about five times their length. This provides a dark burrow that also keeps the cuticle clean.

Small O. scyllarus (under 2 inches) can easily build their own burrow under a piece of coral rubble and end up with burrows that look just like those that they construct in the field - an inch in diameter and six inches long. However, with larger animals, it is difficult to give them a deep enough gravel bed with enough different sized pieces of rubble to build a natural, dark burrow. They will do the best they can with lumps of coral rubble, but rarely are these burrows really dark and they are not smooth on the inside like a natural burrow. They do much better in a reasonably tight fitting, long pvc pipe. You might consider them "ugly", but with a little work you can bury the pipe and fit rubble around the entrances to camouflage them. Also, I don't know where the idea of constructing "galleries" of pvc tunnels for O. scyllarus. In the field, they dig simple u-shaped straight burrows 3-5 times their length.

Frankly, I find them a pain. The bulbs don't last that long and I usually forget to change them. However, my 100 gal tanks are fitted with 15watt filters with a flow rate of around 400 gph.

Occasionally, if a large male develops shell rot, I will isolate it into a 20 gal system running an 8 watt UV filter. It seems to help.

If I had to choose between skimming and UV, I would choose the skimmer.

I keep O. scyllarus in some of my reef tanks with good results. The larger the system and more complex the structure (providing dark burrows), the better.

I think this is all about water quality.

The more stable the aquarium and better the water parameters, the less likely the animals are to develop shell rot.

I suspect that shell rot is more of a problem for Europe and the US because of the stresses of shipping. The O. scyllarus that we get here in the US have been in the pipeline longer experiencing poorer conditions than the animals you receive in Australia.

By simply reading this you can learn a lot about O.scyllarus & Shell Rot as I said above it is all from the man you would want to ask about the disease anyway so hopefully this thread should answer most questions.
When I first got The Juggernaut 7 months ago he came to me inflicted with Shell Rot luckily not as bad as I have seen and certainly something that if recognized straight away (like I did) and action taken (like I did) he could recover (like he did :D).

The largest portion of the Shell Rot was on his Telson/Tail, the large Scab looking area on the Right side is all Shell Rot very deeply affected. 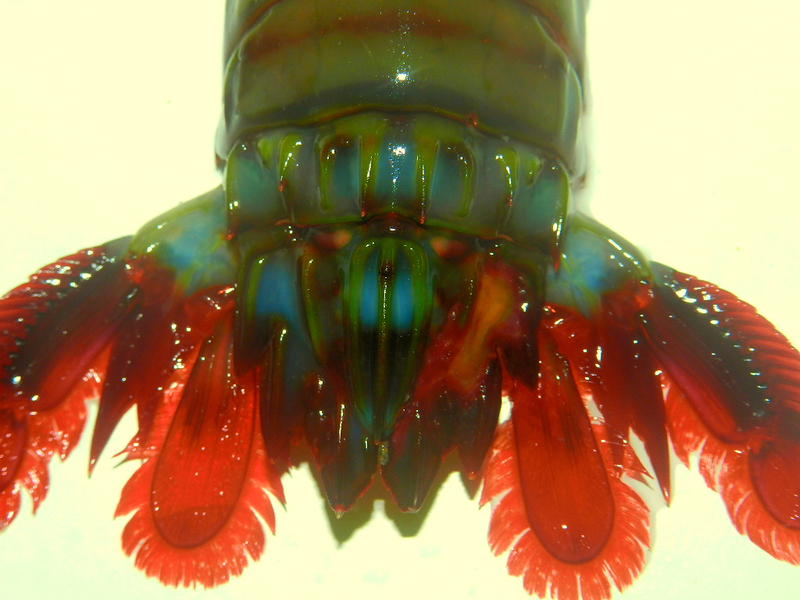 The Abdomen was showing clear signs of Shell Rot and a decent sized blotch had already begun (circled).

Just so you know what Shell Rot is (I posted those pics much further back in my other thread) it gets much worse though, it seems that the "Tough Nature" of the Peacock becomes it's worst enemy...rather then just keel over and die quickly.. it will struggle on rite till the end with it's antenna, eyes, legs swimmers all 'digits' slowly falling off.
Great post @Kharn!

Don't think we will ever keep them but that is great information to those that would like to. They are beautiful looking creatures. :)
The good part personally for me is that both my O.scyllarus tanks are the largest tanks of them all (not having dividers) and with all the PVC being virtually under the substrate...it makes for a LOT of room above the substrate for Corals :) that is once all the upgrades are completed and there is much better water quality.

One thing I am worried about is that I am incapable of welding my 2nd set of stands together at work...the boss man cracked it (even though all work on the stands was done on weekends / after hours) so I am thinking I might have to just bolt this next set of stands together using really strong bolts...I have a feeling that it would cost a lot to have someone weld it all up for me (being 3 stands all up just like my current ones).
Brilliant read, I really enjoyed that article.


Kharn said:
Ten years later we know no more about the causes, prevention and cure of shell disease than we did then. I don't know of a single study that has isolated and characterized the infection or that has systematically treated it with antibiotics or anti-fungal medications.
Click to expand...

Argh I can relate to this so well, there is surprisingly little research done on ANY of our native animals. You'd think we'd have it all in the bag by now but no...
You can however take matters into your own hands (Hazar...!). I did a Parasitology workshop at James Cook University in Townsville and you can send samples to their lab for them to identify what treatments the disease would respond to. You would have to enquire directly for costs, it is not cheap but not out of reach either.
There are no handy Reefuge members close to you that can weld? :)

Synodontis said:
There are no handy Reefuge members close to you that can weld? :)
Click to expand...

I haven't really asked yet...but at the same time if bolting it all together should work just as easily (as I will use High Tensile Gal Bolts rated to over a ton each just to make sure none give / break).
You must log in or register to reply here.
Share:
Facebook Twitter Reddit Pinterest Tumblr WhatsApp Email Link